A week has passed in Turkey’s fight against the fires.

The fight against the flames continues at 14 points in 5 provinces.

The flames, which spread due to the high temperatures, low humidity and strong wind, also spread to the districts of Çarızözü, Senir, Narağacı, Balkaya and Ümutlü as well as Ortakonuş.

While the fires are under control in some parts, extinguishing work continues in some neighborhoods.

The Gündoğmuş-Antalya highway, which was controlled for some time, was opened to traffic.

Manavgat The response to the fire in the neighborhood continues. Forest fires are effective in the districts of Beygın, Çardak and Kızıldağ.

Teams continued their firefighting efforts with automatic extinguishers and fire trucks throughout the night, and the aerial response continues.

AksekiOn the other hand, it was reported that the ongoing fires did not threaten the settlements. Akseki District Governor Volkan Hüldü said: “There is a fire going on only in Gülen Mountain. We have opened a way so that the flames do not spread to the residential area, and the response continues from the air.

Recalling that the Kepezbeleni district was the most damaged by the fire, Hüldür noted that the necessary needs of the citizens were being met here.

Marmaris, Koycegiz, Milas, Bodrum, Kavaklidere In order to extinguish the fires that cause great damage in the forest area of ​​the neighborhoods, the teams fight from the air and from the ground.

Flames broke out in Bodrum Yeniköy. The flames surrounding Mazı between the two districts moved towards the Çökertme district under the effect of the wind. The people were evacuated after warnings from the gendarmerie.

The flames engulfed a site in the Milas Türkevleri district. Security forces evacuated citizens from the site. After the forest fire spread in Köyceğiz district, 3 neighborhoods were evacuated. 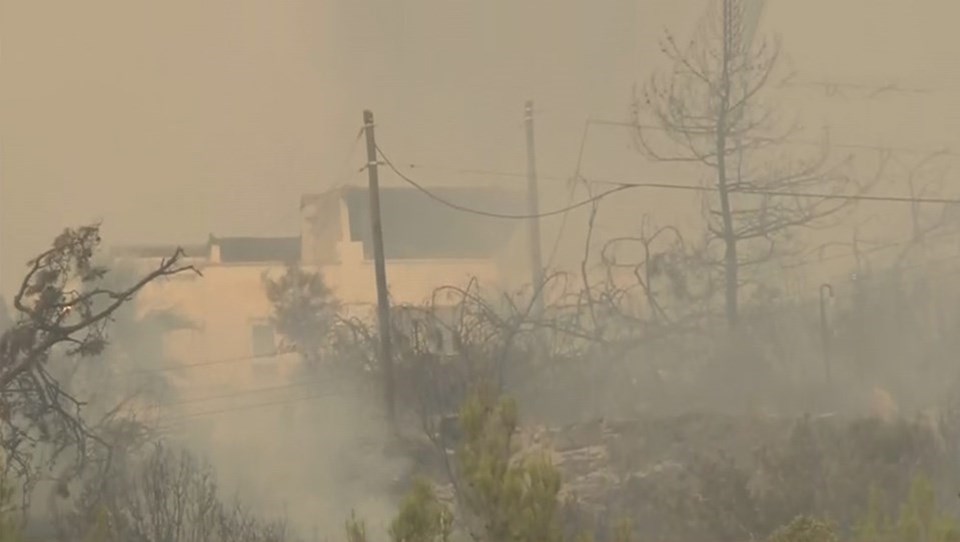 After the forest fire spread in Köyceğiz district, 3 neighborhoods were evacuated. The fire, which started in the forest area of ​​Ağla district, spread in a short time under the effect of the wind. The crews responded to the fire from the air and from the ground.

The districts of Çayhisar, Zeytinalanı and Taşdibi threatened by the flames were evacuated as a precaution. After the announcements made for the evacuation, some citizens left the area with their own vehicles.

15 houses in the neighborhood threatened by the flames of the forest fire in the district of Menteşe were evacuated as a precaution. A fire broke out in the forest area of ​​Muratlar district for an undetermined reason. The flames spread in a short time under the effect of the wind.

On notice, 2 helicopters, sprinklers and firefighters were dispatched to the area. Trying to control the fire.

Menteşe District Governor Caner Yıldız said the fire was in the forest area, but 15 houses near the area were evacuated as a precaution. Yıldız said the teams will continue their work through the night.

Work is underway to control the forest fire in the Sütçüler district in Isparta. The fire, which started in the forest at the site of Çandır Village Written Canyon Nature Park, spread in a short time under the effect of the wind.

Teams continued their firefighting efforts with automatic extinguishers and fire trucks throughout the night, and the aerial response continues. Efforts are being made to bring the fire under control as quickly as possible, which is in effect around the village of Çandır, the districts of Yıldız and Camili.

Deputy Director General of Forests Mustafa Özkaya said the blaze should be brought under control today. Özkaya said: “I hope we hope to give good news from Sütçüler today. Isparta is a region similar to Antalya. We want to focus on Antalya and Muğla with all our air and ground power. That is why we let’s intervene immediately and put out the fires outside. “

Efforts continue to extinguish the forest fire in the Tavas district of Denizli.

A fire broke out in the forest area near the sites of Pınarlık and Çakıroluk in Pınarlık Mahallesi for an undetermined reason. As soon as the notification was received, teams from the regional fire and forestry department of the Metropolitan Municipality of Denizli were sent to the region.

The fire broke out by land with 35 sprinklers, 250 forestry workers, 10 construction machinery, concrete mixers and numerous tankers. Neighborhood residents also support the work of the teams. Two helicopters operating in the area also intervened in the air flames.

Many citizens, who received the news of the fire, are helping the teams with food, water and ayran. While the gendarmerie and police teams maintain security measures at the points they have determined in the region, they do not allow the entry of unauthorized persons.

Denizli governor Ali Fuat Atik said: “We did everything we could to control the fire. Thanks to the citizens of Denizli, they help us a lot. They support the work of the teams with all the tools and equipment at their disposal. We have the fire In the morning the helicopters maneuver When there is a situation to do so, we will start the cooling processes after we have brought the fire under control before it gets too big with intervention from above.

In the press release from the General Directorate of Forests (OGM), it was reported that 160 of the 174 forest fires in 39 provinces have been brought under control and that extinguishing work is continuing at 14 points in 6 provinces.

The death toll from the fires stands at 8. Health Minister Fahrettin Koca announced that one person died in Muğla. 7 people died in Antalya.

A PERSON IS ARRESTED IN MANAVGAT

The suspect, who was caught red-handed in a forest fire in the Manavgat district of Antalya, has been arrested.

CY (16) was taken into police custody on July 30 in connection with the fire that broke out on July 28 at the central intersection of Kavaklı Mahallesi.

The suspect, who was transferred to the courthouse at the end of his procedures at the police station, was arrested by the criminal magistracy, on the charge of “arson of forests”.

The fire, brought under control the same day it appeared, damaged 2 buildings, 1 warehouse and the forest area.

In the statement made by AFAD, it was reported that a total of 62.5 million lire had been paid so far in the area of ​​the fire. In the statement, which stated that 1759 citizens had received shelter, it was stated that 357 family-type tents, 40 general-purpose tents, 204 living containers and 42 toilet-shower containers had been shipped to the fire zones.