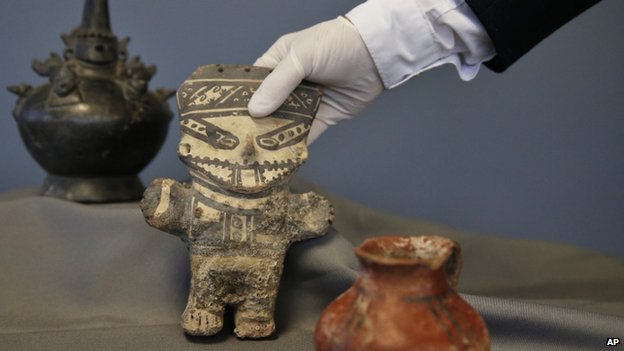 The US has returned about 20 ancient artefacts – some more than 1,800 years old – to Peru.

The objects include pottery and pieces looted from ancient Peruvian graves dating back from before the arrival of the Spanish in the 16th Century.

They were found during four separate investigations over several years by US the customs service.

A spokesman said the objects belonged to the people of Peru, and were part of the country’s rich heritage.

Investigators say a middleman in Peru bought some of the pre-Columbian items from local farmers in Peru who robbed burial sites. They were then shipped by post to a smuggler in the US.

Since 2007 the US authorities have returned 7,150 items to 27 countries including France, China, Poland and Iraq.