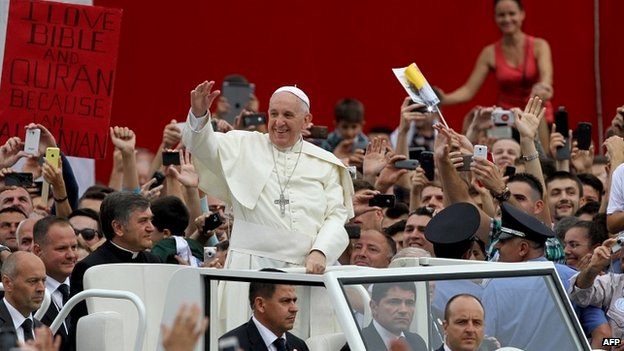 Pope Francis said he had wanted to visit the Balkan nation because it had suffered very, very much

Pope Francis was met by big crowds in the capital, Tirana

Tens of thousands of Albanians attended an open air Mass celebrated by the pontiff in the capital, Tirana.

He praised the peaceful coexistence of religions in the country, where a Muslim majority lives alongside Catholics and Orthodox Christians.

Security is tight for the visit amid rumours of a jihadist plot against him.

During a meeting with top Albanian government officials, Pope Francis hailed as a “precious gift” the mutual respect between Muslims and Christians in the country.

“This is especially the case in these times where an authentic religious spirit is being perverted by extremist groups and where religious differences are being distorted,” he said.

“Let no-one consider themselves to be the ‘armour’ of God while planning and carrying out acts of violence and oppression!”

This is seen as an apparent reference to Islamic State militants who have seized large swathes of Syria and Iraq, persecuting different religious groups there.

In a speech to the leaders of Albania’s religious communities, Pope Francis continued the theme, saying: “No one must use the name of God to commit violence

He earlier said he wanted to visit the Balkan nation because it had suffered very, very much

Albania’s former Communist dictator Enver Hoxha banned religion in the country, which was virtually isolated from the rest of the world

A number of Catholic priests were executed and some 2,000 churches and many mosques were either destroyed or turned into cinemas or dance halls during Hoxha’s rule, which lasted for more than 40 years until his death in 1985

Some 60% of Albanians are Muslim, while Roman Catholics account for about 10%. The country also has an Orthodox Christian population of just below 10%.