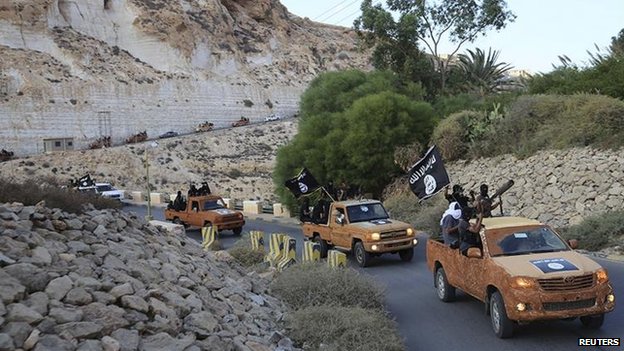 Three young activists have been found beheaded in Derna, in eastern Libya.

The three, who had relayed information about the city through social media, had been kidnapped earlier this month.

Several Islamist groups are competing for control of the city, with some militants recently declaring allegiance to Islamic State.

Libya has been in a state of flux since Col Gaddafi was overthrown in 2011, with disparate tribes, militias and political factions fighting for power.

The BBC’s Rana Jawad, in the capital, Tripoli, says that in the immediate aftermath of the revolution that ousted Gaddafi, many rebel fighters left to fight with militant groups opposing the rule of President Bashar al-Assad in Syria.

Many of the fighters are believed to have returned home, settling in the east of the country, she says.

Beheadings are rare in Libya, our correspondent says, even in areas controlled by militant Islamists, and no group has so far said it carried out the latest killings.

The activists have been named as Siraj Ghatish, Mohamed Battu and Mohamed al Mesmari

Another activist in the city who cannot be named for reasons of safety, said We reject IS being here We can’t come out in public about it

Our correspondent says there appear to be three main militant groups in Derna, with varying degrees of extremism.

They are the Islamic Youth Shura Council, a branch of Ansar al-Sharia, and the more moderate Martyrs of Abuslim Brigade.

The group that declared allegiance to IS is unclear, although the activist who spoke to the BBC said it appeared to be a group that broke away from the Shura Council

Derna has been out of government control since 2012.

In August, a video emerged on social media showing a man being shot dead by an unknown group in the football stadium

The elected government has lost Libya’s three main cities amid the political crisis: