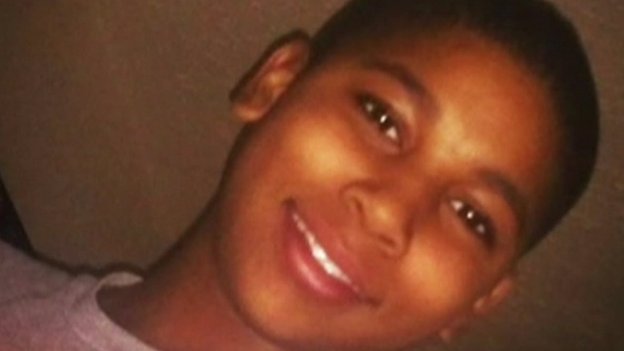 The 12-year-old boy shot by police in the US was told to show his hands three times by officers before they opened fire, a senior officer says.

Tamir Rice, whom the officers appeared to believe was much older, was shot twice and later died in hospital.

Cleveland police has released audio recordings and video of the incident.

His family has released a statement appealing for calm and thanked the police for releasing CCTV footage of events leading up to the shooting.

The CCTV video shows Tamir Rice pointing the toy gun at a passer-by from the playground where he was shot, which prompted a 911 emergency call.

Recordings of radio communications reveal a police officer at the scene describing Tamir Rice as aged “maybe 20” after the shooting.

A separate recording appears to confirm the officers were not told the gun might be fake.

The family of Tamir Rice said that they believed that their son’s death could have been avoided.

In a statement, the family said: “The video shows one thing distinctly: the police officers reacted quickly.”

They called for a thorough investigation of events and asked people in their community to remain calm and “protest peacefully and responsibly”.

Cleveland police said on Wednesday that the family had given permission for CCTV recordings of the shooting to be released.

Minutes later, a police car drives up and stops immediately next to him

Chief officer Edward Tomba said that the car door was open when the officers arrived, and that they had ordered the 12-year-old to show his hands three times as the car pulled up alongside.

The boy was then shot and fatally wounded

In a recording immediately after the incident, a police officer is heard saying: “Shots fired, male down, black male, maybe 20

The operator describes the incident as a black male sitting on the swings, keeps pulling a gun out of his pants and pointing it at people

An audio recording of the 911 emergency call had previously revealed that the caller had said the gun was “probably a fake on two occasions, before adding he was not sure whether it was real or not