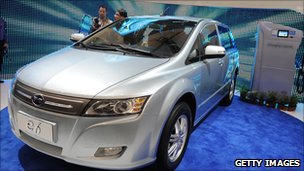 BYD said sales of its so-called new energy vehicles had grown compared to a year earlier.

Shares in the Chinese car and battery maker BYD fell by more than 8% in Hong Kong trade on Monday, a day after the firm posted worse than expected first half earnings.

Shares in BYD, backed by the billionaire US investor Warren Buffett, later recovered to close up by 2.24%.

The firm is also listed in Shenzhen, where shares fell by 0.22% on Monday.

China’s car market, which has experienced huge growth in recent years, became the largest car market in the world in 2009.

However, the Chinese government has aimed to cut the number of motorists on the roads in an attempt to battle chronic pollution problems.

In mid-2010 it started removing financial subsidies for traditional car purchases, which put the brakes on sales growth.

BYD said sales of its so-called traditional fuel cars fell by 27% during the six months to June from a year earlier.

It also said it expects weak third-quarter earnings due to a continued slowdown in traditional car sales.

The battle for traditional car sales between both domestic and foreign car manufacturers on the Mainland was a factor BYD said had also affected its bottom line.

Due to the intense competition in the automobile market and the change of subsidy policy for energy-efficient automobiles, the market share of China’s local brands has shrunken by 3.48 percentage points as compared with that of last year, the firm said

In China, a new energy vehicle is considered one that is powered in full, or part, by electricity, including plug-in hybrid vehicles, or battery-operated cars

In February this year, China’s Ministry of Finance said it would boost its subsidy standards for these vehicles until at least next year.

BYD, which also manufactures handsets and rechargeable batteries, as well as some solar products, said its overall first half revenue rose 4% from a year earlier.