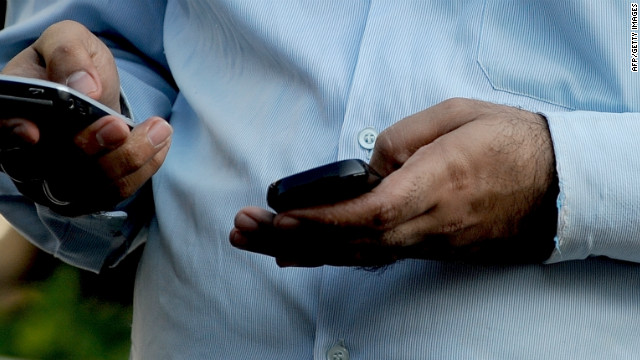 Do you really need to send that text? Trends aside, sometimes the answer is “no.”

Editor’s note: Brenna Ehrlich and Andrea Bartz are the sarcastic brains behind humor blog and book “Stuff Hipsters Hate.” Got a question about etiquette in the digital world? Contact them at netiquette@cnn.com.

(CNN) — We’re texting more than ever, and, like society, the texts themselves are getting worse and worse.

That’s a conclusion cobbled together from the Pew Internet and American Life Project, which found that the median number of texts adults send and receive in a day doubled from 2009 to 2010, and much anecdotal observation from the authors.

Read on to learn just how terrible silent cell phone users are these days, and the five texts that should never traverse that satellite-banked arc from your hands to the eyes of another.

1. “I think we should see other people.”

It isn’t just skittish teenagers pulling this rude move. Last year, a survey from Lab 42 found that 33% of adults (adults!) had broken up with someone via text, e-mail or Facebook. Forty percent said they “would ever” do it, indicating that 7% of the surveyed humans are soulless jerks who haven’t but would hurtfully sever ties with a lover if only someone would respond to their advances.

Yes, breaking up is hard. Knowing you’re going to hurt someone you cared about with your words indeed makes your stomach do some Cirque de Soleil-esque acrobatics. But shooting over a one-way missive to deliver the news for you? It’s supremely cruel, because it leaves the other person cocking his or her head with Fred Willard-esque histrionics and asking, “Hey, wha’ happened?” That complete lack of closure (not to mention the dearth of soothing, I-care-about-you-as-a-human-being signals you send with your voice and motions) add up to WAY more ruminating than is necessary.

Netiquette: Be careful when diagnosing your ailments online

The break-up text is only this much more noble than ghosting on someone you’re dating, letting the silences grow longer and longer until you can tell yourself it was a mutual separation and then scuttle into the night like a cowardly cockroach. If you went on enough dates to call this person your boyfriend or girlfriend, he or she deserves at least a call.

A text proposal. It actually happened, people. And if that isn’t innards-wrenchingly horrific enough, after it happened, Miss Manners went on to condone it. Can we please consider marriage proposals one of the few remaining bastions of old-fashioned romance, free from the lackadaisical pall that technology has cast over everything?

Unless you’ve rigged some clever feat that ties in the nerdy way you met, your phone should be put away, your knee should be on the pavement, and your hands should be clutching a ring, not picking a ringtone.

3. “We’re thinking about going to Shortstop later but Aiden is still napping & Mona was talking abt having ppl over for a cookout. IDK if I want to be out in the heat tho since I’m still hungo from Bosco’s pirate party thing last night. Are you and Weeds still… [1 of 2]”

Texting was supposed to save us time by letting us bypass the phone call and just instantly telegraph the important stuff. But we’ve grown so reliant upon it that we obliviously miss, Mr. Bean-like, the conversations that could happen expeditiously over the phone.

So often, we put our thumbs to work typing out long and convoluted messages that warrant a detailed, meticulous volley of responses, when wagging our tongues would have cleared things up in 30 seconds flat. More than half of texters have “long, personal text message exchanges,” according to a 2010 survey. They are all wasting time.

Our rule of (red, raw, overused) thumb: If your text is longer than two sentences and it demands a response other than a simple yes or no, just hit Call. You’ll save everyone a little time and a lot of confusion.

According to a Pew Research Center study that is (according to the Times) due out later this year, 6% of American adults — that’s one in 17 upstanding citizens — has sent a nude or nearly nude (but not “never-nude”) photo on a cell phone. And 15% have received such a text. (Apparently these self-portraitists are prolific.)

Leave something to the imagination, folks.