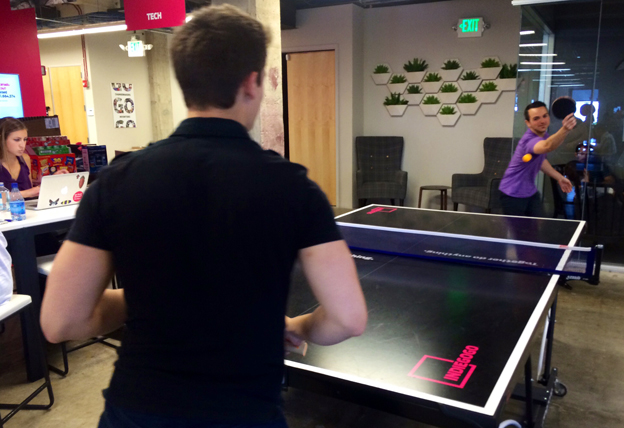 It’s a word despairing teachers use to describe the class troublemakers, but in Silicon Valley “disruptive” is what everyone wants to be.

The whole theory behind disruptive innovation – cheaper, sometimes lower-quality technologies which come along and destroy the business models of established industries – is a subject of ferocious academic debate at the moment, after an article in the New Yorker questioned the concept.

But in San Francisco this week, I’ve met two very different firms that believe they are proving just how rapidly their disruptive ideas can change the world. The first is Indiegogo, the crowdfunding site that has been somewhat overshadowed by Kickstarter in recent years, despite having pioneered the concept two years earlier.

I meet Danae Ringelmann, one of the co-founders, in a sixth-floor office that could be the set for a dot com drama. There’s a ping-pong table, an open kitchen with free food, a bike rack – and on the walls artefacts relating to firms that have raised money on the site. She never utters the word Kickstarter – but it’s clear she feels her business should get more of the credit for the crowdfunding revolution.

Ideas are everywhere, the only friction point is access to capital”

Indiegogo claims to be more open and flexible than Kickstarter, allowing anyone to raise money for just about anything – from $10,000 (£5,900) for an urban garden, to millions for a project called solar roadways, which aims to turn roads, paths and car parks into solar electricity generators.

There’s been criticism that Indiegogo projects are much less likely to deliver on their promises than those on Kickstarter, and there have been concerns that there is too little quality control.

But Danae Ringelmann says each campaign is a process of trial and error, with an ever more fruitful relationship between companies and the consumers who are effectively road testing their ideas.

And that’s where the disruption comes in – the whole crowdfunding idea is a challenge to the expertise of the venture capital industry, the gatekeepers of innovation. Until now, the only way to get a technology start-up past first base was to convince some venture capital partner that your idea was a better bet than the 20 other elevator pitches he’d heard that day.

Now, you just put up a campaign with a well-made video on Indiegogo or Kickstarter and hope that the crowd is wise enough to see its merit.

“The financial infrastructure that existed before wasn’t bad – it was the best it could be,” says Ringelmann, “but now with technology and the internet we’re making it better.” And she believes that crowdfunding could make the whole idea of technology clusters in specific places redundant. “Ideas are everywhere,” she says, “the only friction point is access to capital.”

Whether the big beasts of venture capital are really shaking in their boots is another matter – they seem to be adapting rapidly, co-opting the crowdfunding platforms as a cost-effective way of testing the products of the companies they invest in.

But the second company I visit is already causing disruption – not to say discord – on a global scale to the way transport works in cities. Uber’s new offices have some of the same visual cliches we saw at Indiegogo but project a lot more wealth and power. First, you sign in on an iPad, and are asked to promise not to give away any commercial secrets you may spot.

Then you walk into vast, open plan space, which feels part hi-tech call centre and engineering operation, part luxury modern hotel, with sofas and big TV screens showing the World Cup. I meet the Chief Operations Officer Ryan Graves, who seems almost as bug-eyed as I am about the pace of growth of the car service which only started in 2010.

He tells me that just two months ago they celebrated the 100th city around the world to adopt the service which allows you to book a ride via a smartphone app – and now they are heading for 140. But he says “we are very early on in our growth curve… we’ve realised that Uber is going to work everywhere, from Beijing to San Diego. There is an opportunity to change the way we move around the city.”

Its disruptive technology is the algorithms that match drivers with passengers faster and more efficiently than any dispatcher in a minicab office can manage. In its first market, San Francisco, another executive told me it was now disrupting more than just the taxi trade – people were using Uber for journeys they would have made under their own steam or not at all. Some were even giving up their cars altogether.

But whereas Indiegogo’s disruption seems purely positive – unless a few venture capitalists miss out on some deals – Uber’s ambitions to transform the way we move around cities have met with more disquiet. Taxi drivers have protested about unfair competition, and even Uber’s own drivers are worried that they could soon be replaced by self-driving cars.

I tried to suggest to Ryan Graves that in some places the company was actively hated, that there was also concern about the global power of Californian companies which paid little tax. He brushed all that aside – Uber was a force for good, it was improving the lives of its drivers and its users, it was transforming cities into better places.

And he said this about Silicon Valley’s appetite for disruption. “There’s a mentality here about changing the way things are done, not believing the norm has to remain forever… that’s why I moved here, and that’s a pretty damn healthy way of seeing the world.”

That sunny optimism about the positive power of technology still shines brightly here. We are gathering more tales of disruption in San Francisco for this week’s edition of Tech Tent which you can hear on Friday.