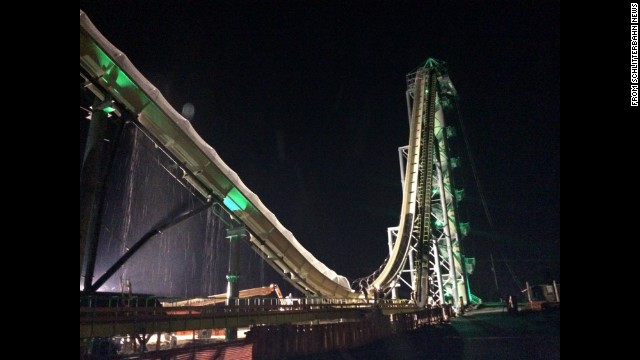 Meet Verrückt: The world’s tallest water slide is opening soon at Schlitterbahn Water Park in Kansas City, Kansas. Its 168-foot drop will deliver what designer John Schooley calls an “extreme thrill ride.” Click through the gallery to see daring slides around the world.

(CNN) — When no wanted to build the world’s tallest and fastest water slide, Jeff Henry built it himself.

So when Verrückt was completed, and it was time to test the 168-foot coaster in his Kansas City, Kansas water park, the choice of test riders was rather easy.

“It was terrifying,” Schooley said. “It was great fun, but it was actually terrifying.”

The slide is slated to open to the public in the coming week. A technical glitch has put the exact opening day in flux.

Officially certified by Guinness World Records in May, Verrückt — which is German for “insane” — is 5 feet taller than the previous record holder, a water slide at a Rio de Janeiro country club.

Verrückt is precisely 168 feet 7 inches tall. To put that free fall in perspective, it’s longer than a plunge at Niagara Falls.

Schooley stressed, however, that the ride is more than a single drop, calling it an “extreme thrill” without comparison.

“You have three or four experiences on the ride,” he said. “There is a 3-second free fall before you get launched into a weightless situation for a few seconds, and then you come down like a roller coaster and have a long splash down.”

The origins of Verrückt are as extreme as the ride itself.

According to Schooley, owner Henry was at a trade show and simply decided he wanted to build the tallest, fastest water slide at one of his five Schlitterbahn water parks. He immediately shopped the idea to vendors, who declined, but he refused to be denied.

“He decided to build it himself,” Schooley said.

“We have long experience in building water park rides and developing new technology. Our park in Kansas City doesn’t have a height restriction so we decided to put it right here.”

The slower speed allows for an increased weight limit for riders.

“We always ride our rides first,” Schooley said. “And we found out it was too steep and too short. So we were able to redesign it from what we learned. We tore down two-thirds of the slide and rebuilt it into the design we have now.”

“It would have been relatively easy to do (just one drop) a long run-out, but to shoot you back over another hill was extremely challenging,” Schooley said.

Schiltterbahn is already home to the Master Blaster, an uphill water coaster over 1,000 feet in length.

Verrückt combines that uphill excitement with the thrills of a true water slide.

If you’re brave, hop on the four-person raft and take the plunge.

Schooley is confident the new ride will attract thrill seekers from across the world.

“We have multiple volunteers to be the first to ride it,” he said. “Roller coaster enthusiasts will have to try it … it has a great potential draw.”

The opening of Verrückt has been delayed several times to ensure public safety. Originally set to open in May, there was a conveyor belt issue as recently as this week.

And there’s one more issue: the stairs.