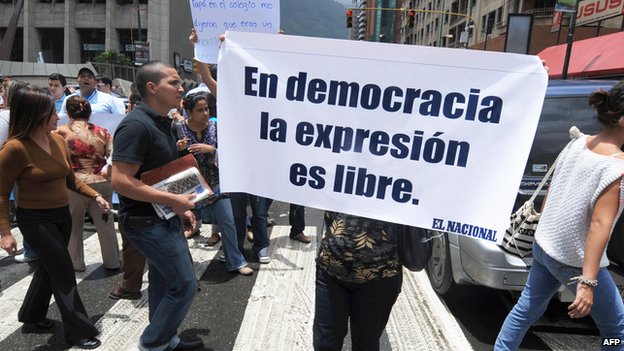 At a 2009 protest by journalists in Venezuela – a country singled out by the IAPA – a banner reads: “In democracy expression is free”

Freedoms of the press and of expression in the Americas have seen a “marked deterioration” in the past six months, a leading advocacy group has said.

The Inter American Press Association (IAPA) said there had been a “significant increase in direct and indirect censorship and physical attacks on journalists”.

The Miami-based group said media workers in almost all the countries of the region had been affected.

The watchdog singled out Venezuela.

“[Venezuelan] police forces and police-style groups on the orders of the government left… several journalists injured,” the IAPA said in a press release.

“Physical attacks on journalists were also recorded during coverage of various election processes in Bolivia, Brazil and Peru, and street protests in the American city of Ferguson and in Sao Paulo and Rio de Janeiro, Brazil,” it added.

The IAPA also reported that over the past six months:

The advocacy group warned that in Argentina, Haiti, Chile and Colombia the government could use existing laws to “meddle in editorial content and criteria”.

It also said that the lack of transparency and access to public information continued to be an obstacle to the free practice of journalism in several countries, including Mexico, Ecuador, Argentina and Peru.

The IAPA report came at the end of its 70th General Assembly, which was held in the Chilean capital, Santiago.