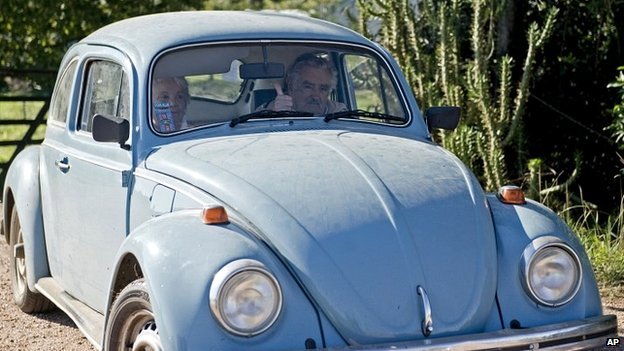 Jose Mujica with his wife Lucia Topolansky. His lifestyle differs sharply from that of most world leaders

Busqueda reported that the offer for the car was made at an international summit earlier this year in Santa Cruz, Bolivia.

“I was a bit surprised, and at first I really didn’t pay too much attention to it. But later, another offer came in, and I began to take it a little more seriously.”

The president said he had “no commitment to cars” and would happily auction it.

He joked that he had not sold it so far because he needed it for his dog Manuela, famous for only having three legs.

Mr Mujica said that if he got $1m for the car, he would donate it to a programme he supports that provides housing for the homeless.

President Mujica is barred by the constitution from running for a second consecutive term and a presidential election held last month is to go to a second round.